Over a year ago, an anonymous source contacted the Süddeutsche Zeitung and submitted encrypted internal documents from Mossack Fonseca, a Panamanian law firm that sells anonymous offshore companies around the world.

According to ICIJ, the leaked documents range from 1977 to December 2015 and include details on 214,000 offshore shell companies with links to 140 politicians including the President of Argentina, the King of Saudi Arabia and Prime Minister of Iceland.

The data itself comes from Mossack Fonseca, a law firm that’s based in Panama. It manages offshore firms, provides financial services, and is, according the The Guardian, the fourth biggest offshore services provider in the world.

Most notably, Russian president Vladimir Putin has been connected to accounts totaling $2 billion, taken out in the name of his closest friend and associate, musician Sergei Roldugin. His trail of money from the accounts was even used on loan to a private ski resort where his younger daughter, Katerina, was married in 2013.

Panama Papers: “It was an email server attack”:

According to what looks like a screenshot posted on Twitter, Mossack Fonseca said, “Unfortunately, we have been subject to an unauthorized attack of our email server.” 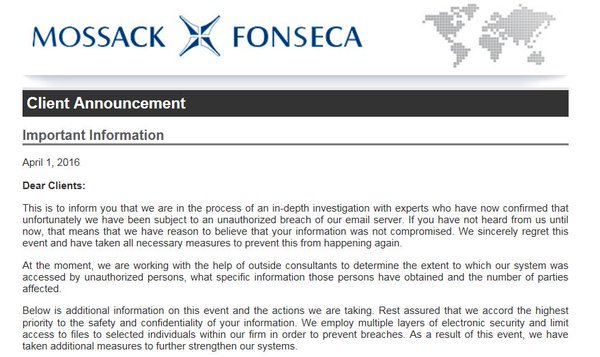 Reporters Without Borders (RSF), in a statement, condemned the cyber-attack which it said showed “how investigative journalism still causes fear” in Tunisia following its 2011 revolution.

The Panama Papers Leak – What You Need To Know:

It’s one of the most significant data leaks of all time and Edward Snowden has labelled it as “the biggest leak in the history of data journalism”.

Britain and the Panama Papers: What you need to know:

The investigation confirms earlier reports that Cameron’s late father, Ian Cameron, was a client of Mossack Fonseca. A stockbroker and multimillionaire, Ian Cameron helped create and develop Blairmore Holdings Inc. in Panama in 1982 and was involved in the investment fund until his 2010 death.

What are the Panama Papers? A guide to history’s biggest data leak:

The firm won’t discuss specific cases of alleged wrongdoing, citing client confidentiality. But it robustly defends its conduct. Mossack Fonseca says it complies with anti-money-laundering laws and carries out thorough due diligence on all its clients. It says it regrets any misuse of its services and tries actively to prevent it. The firm says it cannot be blamed for failings by intermediaries, who include banks, law firms and accountants.

The Panama Papers: 7 things to know:

“The offshore world really only has one product and that is secrecy and when you take away that product they don’t have anything for sale. “For years and years they’ve been getting away with this secrecy and we’re also seeing in the documents that every time the governments and the authorities try to crack down, they’re finding new ways to get around those obstacles or barriers.”

Gabriel Zucman, an economics professor at UC Berkley, has made the most detailed study of the question for his book The Hidden Wealth of Nations, and estimates that it totals at least $7.6 trillion. That’s upward of 8 percent of all the world’s financial wealth, and it’s growing fast. Zucman estimates that offshore wealth has surged about 25 percent over the past five years.

Russian President Vladimir Putin is not directly mentioned but a money trail worth up to $2bn points to a suspected billion-dollar money laundering scheme that was run by a Russian bank and involved some of Putin’s closed allies.